This is Us: Meet Consociate Media’s Amber Wyatt 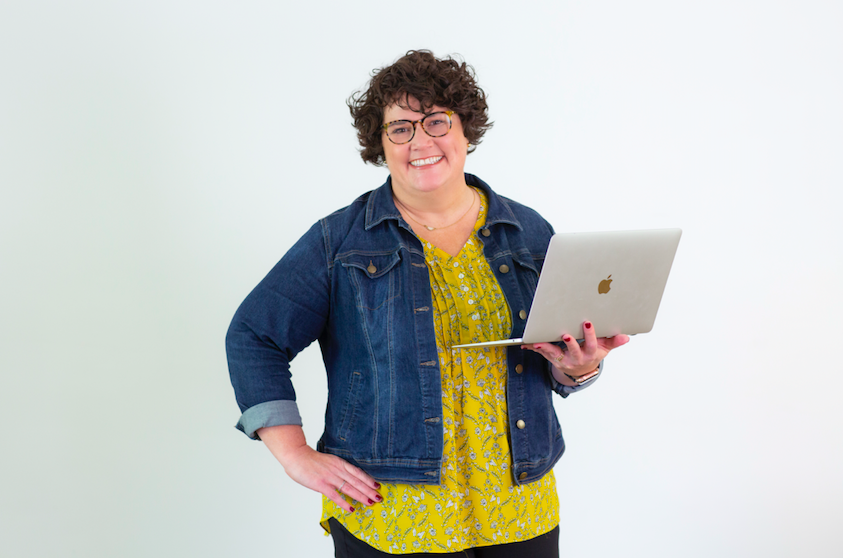 If you’re reading this, you probably know a little bit about the work we do at Consociate Media. We’d also like you to know a little about each one of us, too. Here’s another in a series on our team with a look at Amber Wyatt, who prefers to stay out of the spotlight.

Without realizing it, you’re awfully relaxed sitting on the sofa that faces the white brick fireplace in Amber Wyatt’s cozy brick ranch home that’s just off a one-lane road in rural Suffolk.

A candle releasing a subtle aroma of matcha tea and honey burns but like everything else in the room, doesn’t overwhelm. The butter yellow and mossy green accents sprinkled throughout the space, in the form of throw pillows, a water pitcher and a casual throw, evoke immediate warmth. These pleasing colors are as humble as the host, who isn’t one to call attention to herself.

Amber is as wonderfully low key as the Coffee House station playing in the background.

“I prefer being behind the scenes,” says Consociate Media’s graphic designer, whose soft-spoken go-to word “Gracious” doubles as an adjective to describe her personality.

Understated elegance better describes Amber’s professional style than brash and bold. She embraces typography with a nod to the Mozart Script she chose for her daughter’s wedding invitations. You’ve seen her designs and probably not realized how special they are as most of us take for granted the effect of strong package labeling.

Amber has designed every one of the Williamsburg Winery’s bottle labels. She favors the Act XII Chardonnay label, its Aquiline Two calligraphy as enticing as the lemon and citrus Chardonnay inside.

“There’s no artwork except for the seal; it’s all type,” says Amber, who did minimal packaging work before joining the Consociate team. The Churchland native honed her natural eye at Campbell University, but the truth is her designing talent date back to crafting holiday cards during her elementary school days.

“My mother was going through some old things and found one of the cards I made,” she says. “On the back it read, ‘AmberMark’ like Hallmark.”

It’s no wonder her daughter, Montana, had the best birthday invites growing up.

Like many at Consociate, Amber’s background is started in daily newspapers. Adobe PageMaker was the defacto standard in graphic arts at her first position with the Virginia Gazette. After two years, Amber moved on to the Daily Press, where she spent almost 15 years, leaving in 2010 to become creative director at the Williamsburg Winery.

Admittedly not much of a drinker herself, Amber teamed up with Vice President of Marketing Michael Kimball there, and they blended together like a fine red wine.

“She gets it,” Michael says. “That synergy we have allows her to take an idea or a concept and make it better than anybody could have ever imagined.”

Michael departed in 2019 to join Consociate Media, where today he is a partner. When Amber arrived at the winery for a parting toast, she didn’t expect her future would also be changed by the same marketing, media and management firm. But that night she connected with Consociate’s founding and managing partner, Stephanie Heinatz, whose easygoing nature matches Amber’s.

That was August 2019. Consociate brought Amber aboard the following January.

The fit is perfect. Amber works remotely twice a week and drives to Consociate’s Gloucester office the other three days (fun fact — she had never crossed the Coleman Bridge until after accepting the position at Consociate!).

It’s an ideal balance given Amber’s interests outside of work. She’s active in the same church, Central Baptist, where her grandparents belonged. Though not at all musical herself, she loves music, particularly that made by her family. Montana sings beautifully, and her husband, Kevin, plays guitar.

Amber and Kevin Wyatt have been married 25 years and share a blended family that includes Kevin’s children, Amber Leigh and Josh. Amber’s perfection at design rivals Kevin’s with handiwork. Point to something awesome in their home — the kitchen fixture that involved raising the cabinetry or the bright transformation of a previously dark space that serves as her home office — and she credits to Kevin.

“I love hanging out with my family,” says Amber, whose parents still reside in Churchland. Her three brothers live close and family reunions are annual occasions and good excuses to whip out board games or cards — Rummy and Hues and Cues are go-tos. After two years of adhering to the COVID restrictions, Amber has found newfound joy in simply being among friends and family again.